About Ehrlichiosis in Dogs 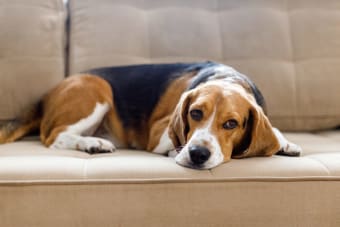 Ehrlichiosis is a serious tick-borne disease seen in dogs across the Southeastern and Southwestern US. Early detection and treatment are essential to prevent this condition from reaching its more severe stages. In today's post, our Burlington and Bellingham vets explain the stages, symptoms, and treatments for ehrlichiosis in dogs.

What Is Ehrlichiosis In Dogs?

Ehrlichiosis is a disease found throughout the United States and Canada that develops in dogs after they have been bitten by an infected brown tick. The organism which is spread by the ticks and causes the disease (Ehrlichia canis or E. canis) is considered endemic to the southeastern and southwestern states. Ehrlichia bacteria can be challenging to treat since most antibiotics are unable to reach the inside of the cell where they live.

What Are Ehrlichiosis Symptoms In Dogs?

There are 3 main stages of Ehrlichiosis in dogs and each stage has different symptoms, early disease (acute phase), sub-clinical (no outward appearance of disease), and clinical or chronic (long-standing infection).

The acute stage of ehrlichiosis can last 2 to 4 weeks, during which the infection is either eliminated or your dog will progress to the sub-clinical phase. Symptoms of the acute stage include:

The sub-clinical phase is often considered the worst phase of ehrlichiosis in dogs because there may be no outward sign of the disease, meaning that it can progress undetected.

In some cases, the disease is detected when the vet notices prolonged bleeding from the injection site after taking a blood sample. If the organisms are not eliminated in this stage, your dog’s infection may move to the next stage - clinical ehrlichiosis.

Clinical ehrlichiosis occurs when the organism isn’t eliminated by the immune system in one of the previous stages. This stage can lead to serious symptoms, including:

This phase becomes extremely serious if the dog's bone marrow (where blood cells are produced) fails, meaning that your dog will be unable to create any blood cells they need to sustain life (platelets, white blood cells, and red blood cells).

How Is Ehrlichiosis Diagnosed?

Dogs in the early stages of this disease may test negative for the condition, making the infection difficult to diagnose early on.

Because the immune system usually takes 2 to 3 weeks to respond to the presence of the organism, and for antibodies to develop, it may take testing at a later date to detect antibodies and properly diagnose the infection.

Your veterinarian may use a few different tests to find out which species of Ehrlichia are infecting your dog, then send the tests to our lab for analysis. Because we have an onsite lab and diagnostic testing at Carolina Veterinary Specialists in Charlotte, we’re able to get results quickly and efficiently.

The detection of antibodies, combined with certain clinical signs are your vet’s primary diagnostic criteria. More rarely, the organism will be detected in blood smears or cell samples from the spleen, lungs, and lymph nodes. Baseline blood tests, including a blood cell count and chemistry, should also be completed.

If anemia (low red blood cell counts, high levels of globulin protein, or a low platelet count) are spotted in the blood, this is a good indication that ehrlichiosis is the problem.

How Is Ehrlichiosis Treated?

If your pooch is experiencing severe bleeding problems or anemia due to ehrlichiosis, they may need a blood transfusion along with being treated for the disease.

Antibiotics such as the easily accessible and typically well-tolerated doxycycline may be used for about 4 weeks. Different medications such as steroids may be prescribed depending on your pup’s clinical state and blood parameters.

What Is The Prognosis For Treating Ehrlichiosis?

The short-term prognosis following effective treatment is typically very good. Once your pet begins treatment you should see an improvement in your dog's condition within 24 to 48 hours, if the disease was caught in its acute phase or mild chronic phase.

How Can I Prevent Ehrlichiosis?

Prevention is always better than treatment when it comes to tick-borne diseases. Try to ensure there are no ticks in your dog’s environment by using the tick prevention product that your vet recommends for your pooch. The right tick prevention for your dog will depend upon your pup's risk of exposure to disease-causing ticks and other factors. Speak to your vet to find out more.

Note: The advice provided in this post is intended for informational purposes and does not constitute medical advice regarding pets. Please make an appointment with your vet for an accurate diagnosis of your pet's condition.

Do you think that your dog may be suffering from ehrlichiosis? Contact us! Our Board Certified Veterinary Specialists provide advanced diagnoses and treatment for Burlington and Bellingham pets.

Chuckanut Valley Vet Clinic and Chuckanut Feline Center is accepting new patients! Our experienced vets are passionate about the health of Burlington and Bellingham companion animals. Get in touch today to book your pet's first appointment.