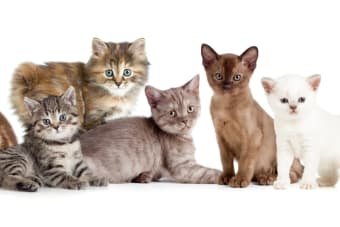 Are you and your family ready to adopt a cat? Today, our Burlington and Bellingham vets share a list of the cutest and fluffiest cat breeds that could make an excellent addition to your home.

Munchkins, despite their small stature, are extremely active and can be found in homes all over the world, from Australia to Japan.

The Ragdoll is a huge and robust cat that has gorgeous fur. They are amiable, loyal, and can be taught to play games and do tricks. They get along nicely with children and are typically good with other pets. They do, however, shed and aren't especially simple to groom.

The Maine Coon is the largest domestic cat breed, capable of weighing 20 pounds or more. They're also happy cats who will adjust to life with your family, and while they may follow you around like a shadow, they aren't too demanding.

The Ragamuffin is a docile cat that is known for slumping into the arms of its owners in search of love and attention. This breed will adore you, your children, other animals, and often strangers. This robust breed is bright, and its ability to fetch and understand other orders has earned them the reputation of being the puppy of the cat world.

This breed is referred to as the Scottish Fold because of its folded ears. This Scottish-bred cat likes playing and can have a hard time being left alone for extended periods. They are loving and can get along well with youngsters and just about everything.

The Bengal is another wild-looking cat breed that should be thought of as lively and playful. However, the breed is loving and is regarded as a pleasant companion because of its love and propensity to play. The Bengal has high energy requirements that you have to satisfy.

The Russian Blue is a stocky, athletic cat with a silky coat and a kind demeanor. Russian blues, as the name implies, have blue coats and are native to Russia. The breed is noted for being sweet and calm, yet it also enjoys playing. The Russian Blue prefers being up high, so expect stealthy assaults from atop a cabinet or other high perch.

The Siberian is a long-haired cat that is bred to withstand the severe winter environment of Siberia. While this breed likes to play and will typically participate in any activity, they often prefer to rest on their lap or curl up for a nap. Because Siberian cats are demanding and don't give up, they will follow you around all day.

The British Shorthair cat is one of the oldest English cat breeds; it is gentle, calm, and quiet. Because some of these cats have gorgeous blue coats, this breed is often known as British Blue. The breed gets along well with children, other cats, dogs, and almost every other pet you may have. They are well-known for their patience and tolerance.

The Cymric is a long-haired version of the Manx cat, which is known for not having a tail. This breed is also a competent hunter that can serve as a watch cat or security cat for its owners.

American Bobtails, despite their wild appearance, are incredibly loving and friendly. They've been dubbed the "Golden Retrievers" of the feline world. They also have no or very little tail. It doesn't require much grooming and is very affectionate, kind, and enjoys playing.

The Persian and the British Shorthair were crossed to create the British Longhair. These kittens are amiable and can make adorable, caring companions. Because of their lush fur and lap-loving personality, they are frequently referred to as the teddy bear of feline breeds.

Birman cats have pointed coat that comes in six different hues. They almost always have white socks and stunning blue eyes. These cats have lovely, long coats and a cheerful demeanor. The Birman is a type of cat that will discreetly remind you it's feeding time and lavish care for you and your family.

The Egyptian Mau is a breed of cat that may or may not be derived from the original Egyptian cat, although no one knows for sure. Owners are confident, however, that they are friendly cats that, despite vocalizing, do so quietly. The species enjoys hunting but is as content at home with its family, which can include people of all ages as well as other cats and canines.

This beautiful breed has become one of the most popular cats in North America. The history of Persian cats is unknown, although, they are assumed to have originated in Persia in the 1600s. While they may be pretty and loving, owners need to know they shed a lot and require frequent grooming.

Contact our Burlington and Bellingham vets today and schedule an appointment if you would like advice on the best breed of cat for you.

Chuckanut Valley Vet Clinic and Chuckanut Feline Center is accepting new patients! Our experienced vets are passionate about the health of Burlington and Bellingham companion animals. Get in touch today to book your pet's first appointment.